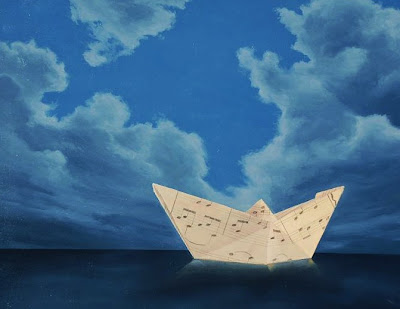 This one's a little bit more whimsical than the skull painting, but I worked on it at the same time and finished it this afternoon. I was at my pal Shawn's recording studio two weeks ago listening to his latest work, one beautiful piece he recorded was called Rain. I went home and quickly drafted a one page film treatment for a short film based on his composition. Paper boats feature predominantly in the film concept, so I though I'd make a small still life study to go along with it and get some more painting experience to boot.

Posted by DennyHollandStudio at 1:43 PM